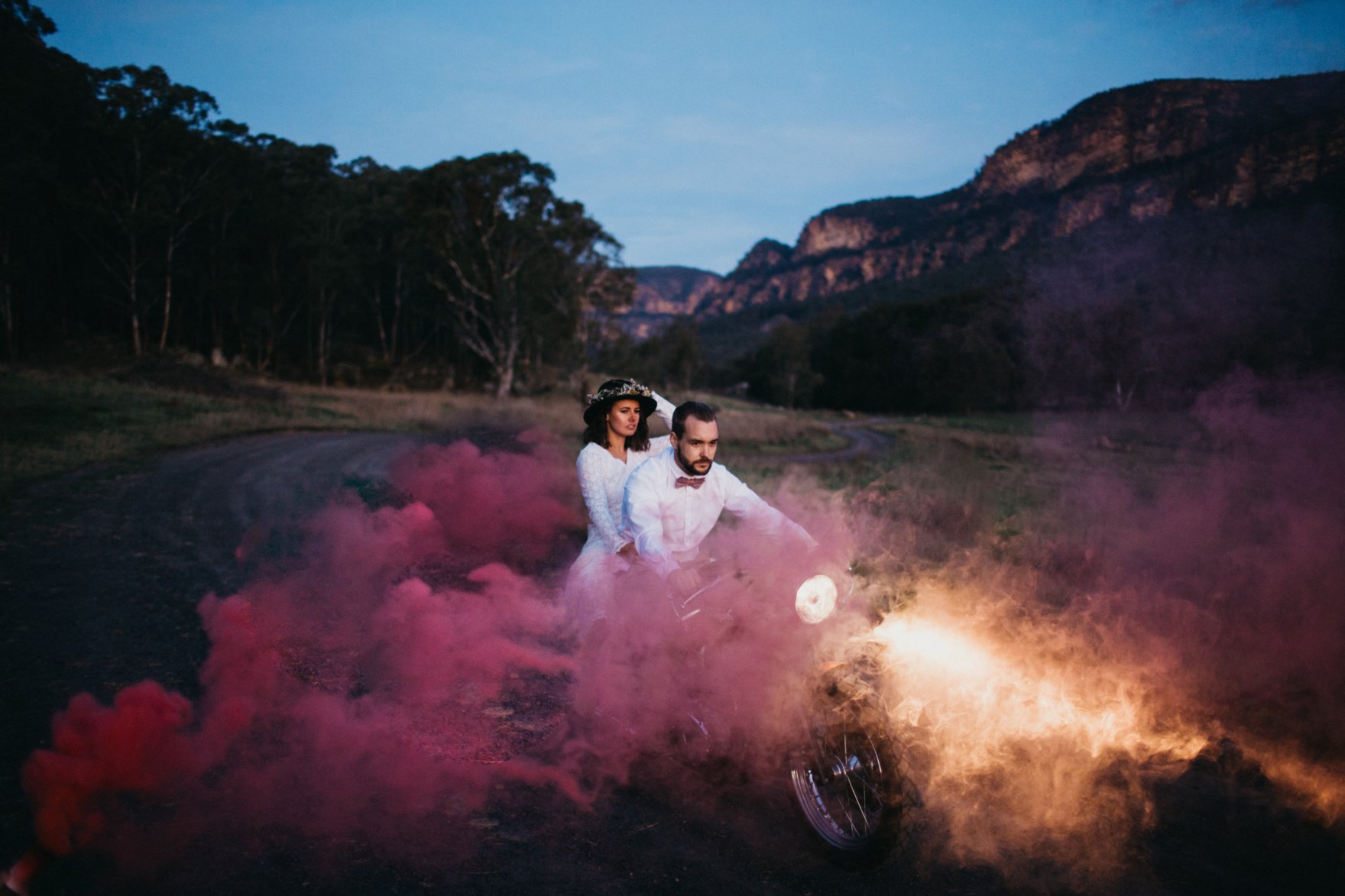 Wedding Tips
Smoke bomb wedding photos have lit up our instagram feeds over the past few years and for good reason. We’re part of a time in history where all the rules around wedding photos are up for reinterpretation. Many of my couples are ditching traditions and eloping or throwing away many of the traditions our parents felt were absolutely non negotiable for their wedding day. Fun fact I was once part of a family conversation (fairly heated fight) about whether or not there could ever be a reason to not have a fruit cake as your wedding cake. Because, “That’s just the tradition, it’s the way things are done.” It seemed pretty humorous to me at the time but I can tell you the bride and groom didn’t think it was funny having to fight the mother-in-law every step of the way to have the mud cake they wanted for the wedding.

Anyway I digress. Where were we? Ah yes smoke bomb wedding photos. They can be absolutely amazing and I’ve shot my fair share of pretty epic smoke bomb content that’s done the rounds of instagram many times over. But there’s a few things that are critical to know about smoke bombs before you just run off buying a whole lot of flammable materials for your wedding day and ruin all your photos.

5 Tips for using smoke bombs at your wedding

If your wedding day happens to be outdoors on a windy day. Hopefully there’s a sheltered area behind a brick wall or in a gully or something like that to hide behind. Maybe a small open barn that’s got a wall that will help shield the win like this photo, which we shot inside a barn to hide from the wind. 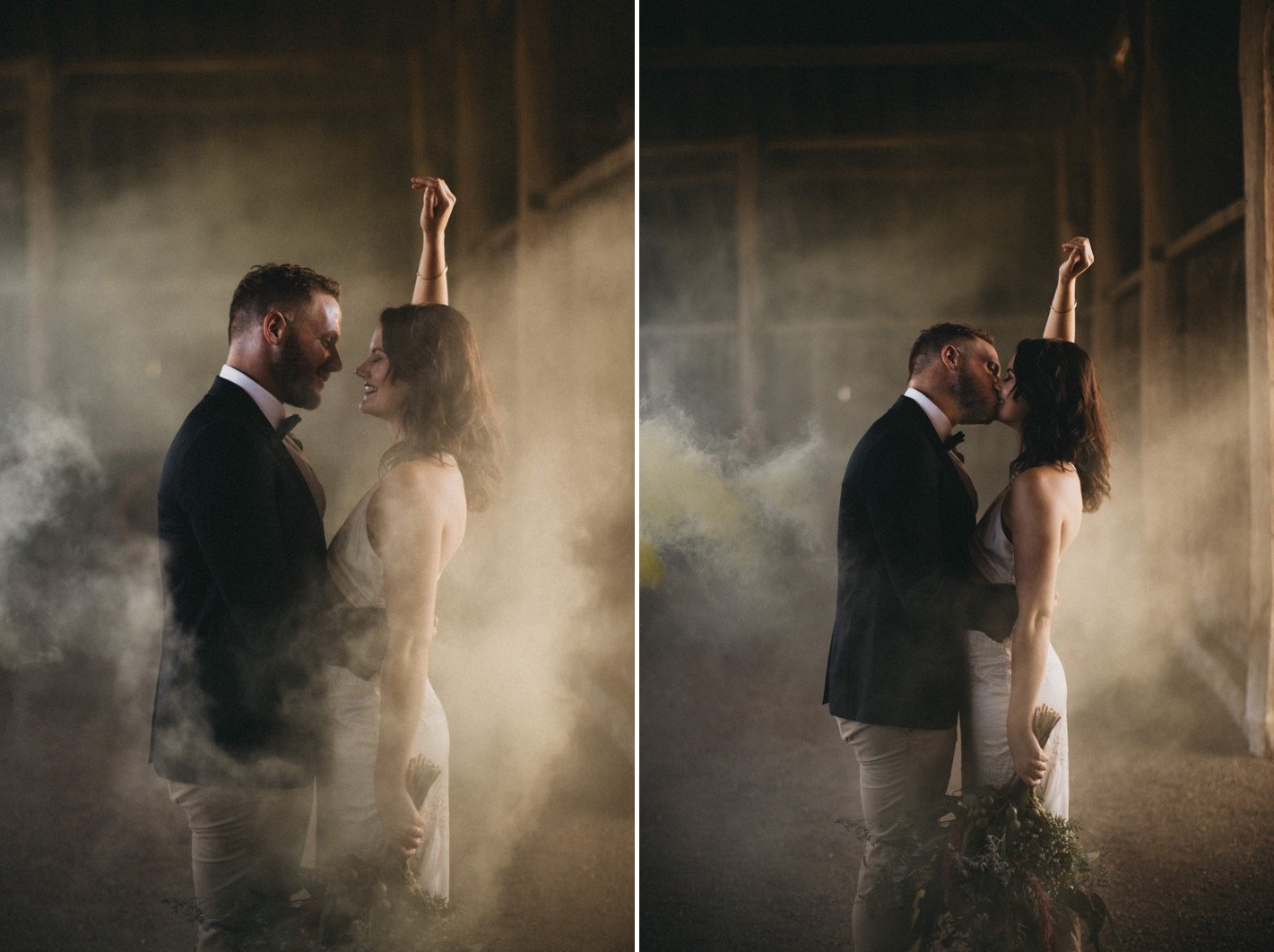 Smoke emitters don’t taste delicious either. So think about where you’re positioning them if there’s a breeze just remember to keep your mouth closed while the gust of wind tries to fill your lungs with colourful smoke. Even a slight bit of a breeze will really mess with your look of the smoke and make it very very thin. The less wind the thicker you’ll get it to be.

You’ve hiked for 20 minutes to the perfect photo spot out in the bush, the sun set is perfect and everything is about to be amazing… But suddenly as you go to light your smoke bomb, you realise your lighter is struggling to actually light up. Unless you’re an experienced smoker there’s a change you’re not the most professional at lighting up a cigarette lighter. 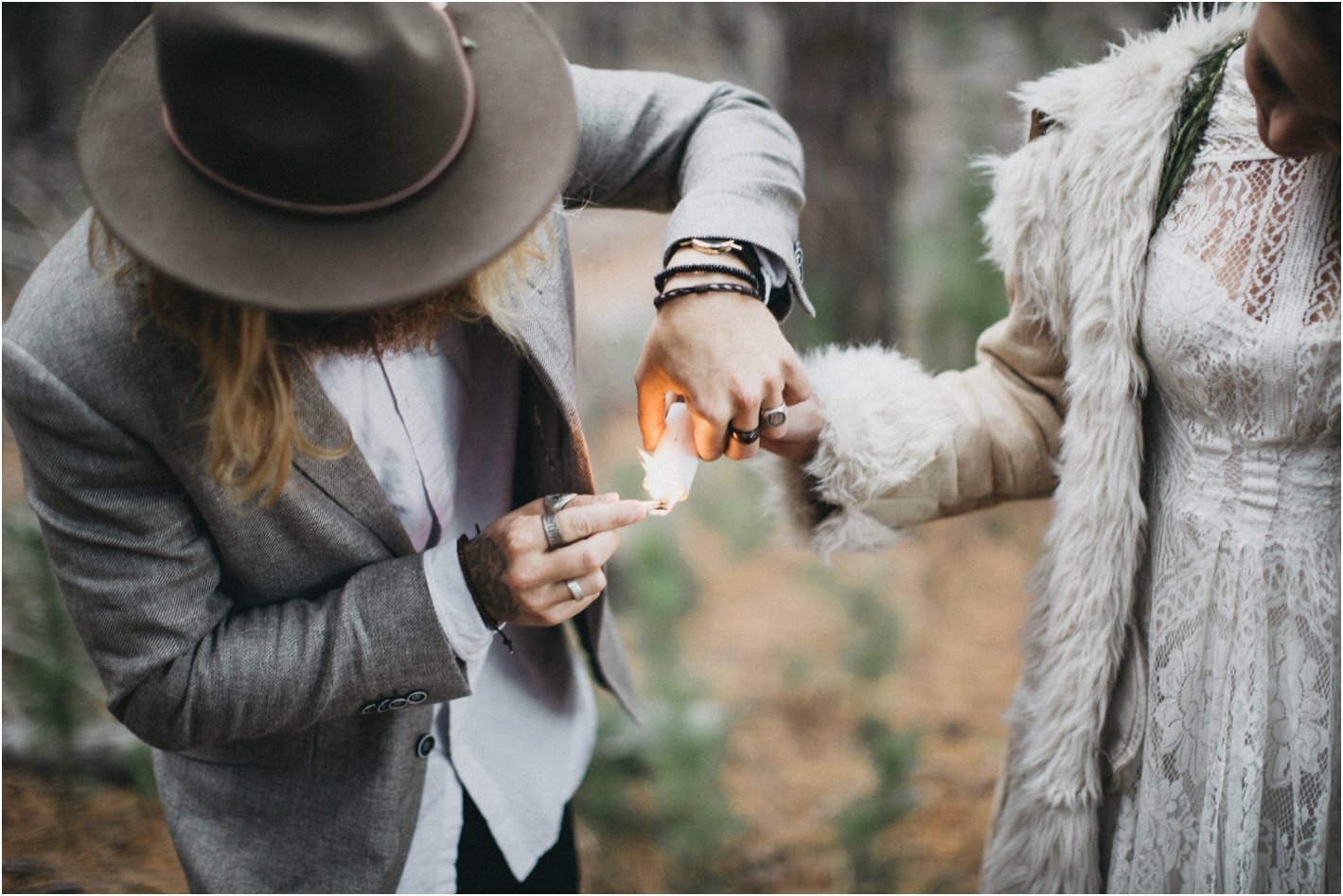 Smoke emitters can be tricky to get a light. They want quite a bit of heat to get them going. Depending on the size there’s around an inch of smoke powder that wants to be lit up, not just a candle wick. Don’t even try with matches unless you’ve got absolutely no wind. Trust me.  The easiest way to light smoke bombs is to turn the smoke emitter upside down and light it from underneath. Because there’s no wick your flame pointing directly up into the powder gets the best lighting to happen. HOWEVER. Get your photographer to do this or a willing groomsman or friend because the smoke does stain your fingers if you’re that close. 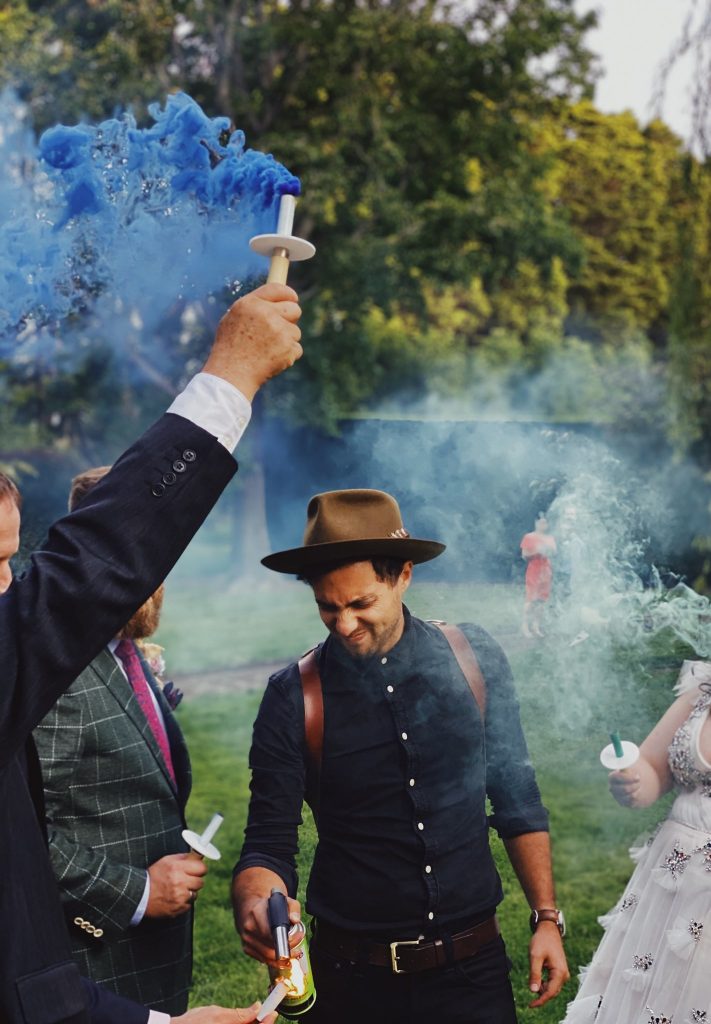 This is a photo of me doing all of the things I pretty much said not to do. Getting plenty of smoke in my eyes and mouth as well as lighting them up the wrong way with a brûlée torch.   You’ve probably seen a ton of smoke bomb wedding photos online and thought oh I like that one. Let’s do that for our photos without thinking about what conditions that specific photo might have been taken in.  If you want vibrant colour from your smoke bombs you’ll really want heavy shade or overcast conditions. You’ve also got the option of having them in the direct sunlight from in front of you but that’s something I would rarely recommend for good photos if possible on sunny days.  The two best scenario’s lighting wise for smoke bombs are to have filtered light from behind through some trees ideally, pop the smoke bombs a decent distance behind you and let the light pour through them and give you beautiful rays of light through the trees. It’ll look a little bit less like there’s colour smoke involved and more like there’s a fog machine on with some beautiful backlighting. (See below) 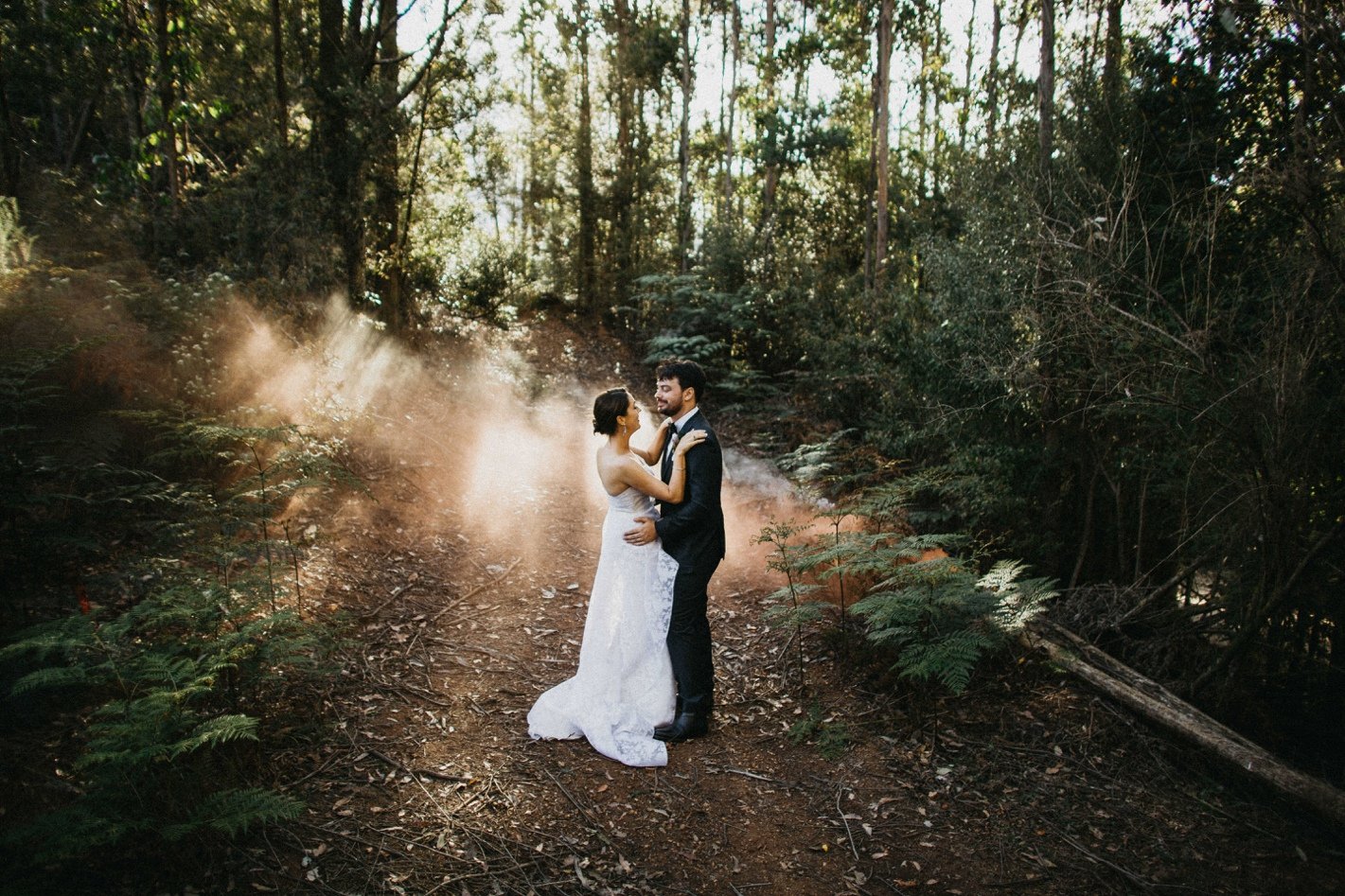 The second scenario and perhaps my favourite for taking some epic smoke bomb wedding photos is in heavy shade or after sunset. That beautiful dusk light with the light coming from in front of you. In sunlight its usually the opposite. But in heavy shade, overcast weather or after dusk you’ll want the light coming from in front of you to give a beautiful soft light on your skin and bring out ALL of the colour in your smoke bombs. I find you also get way less wind just after sunset as well so that’s a double bonus to shooting smoke bomb wedding photos at dusk.

4. You don’t need to use the whole canister at once:

There’s a bunch of different ways this can play out. If you’re on the edge of a cliff taking your super dope smoke bomb wedding photos and then the wind picks up. You can put your smoke bombs out and save them for later. Because the smoke bombs are technically not “on fire” while they’re smoking just stopping the air from getting in might not put them out as quickly as you’d like. So having a little bit of water nearby isn’t a bad call. If you light them up and realise the light and location isn’t working as well as you thought it would. You’re going to want to pop the smoke out and move to the new location. Most smoke emitters last for about 1-2 minutes so you don’t have a ton of time. But at the same time. If you want some variety of shots with your smoke you won’t want to use them all in one location or pose. 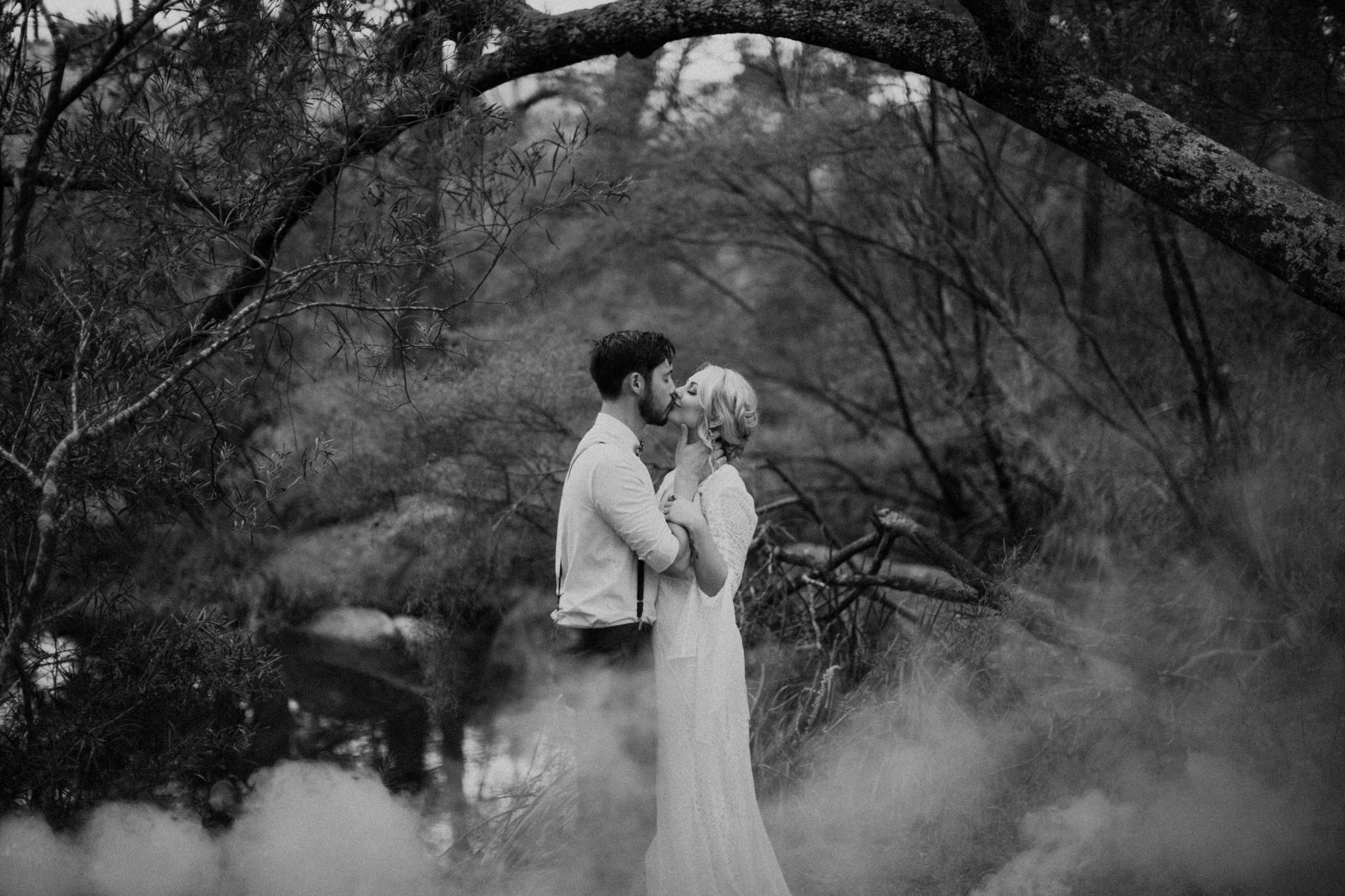 Another little trick you can do is to scoop some of the powder out to create a shorter burn and keep some in hand for later. You definitely can’t play with straight powder if there’s any wind around. However you can do some interesting things with powder outside of its plastic coating.

5. Smoke bomb wedding photos – What are your alternatives?

If you’re in Australia and you’re having a country wedding in summer, there’s a good chance that your venue is not on board with smoke bombs. And rightly so. Some of my favourite wedding country wedding venues burnt down in the bushfires this summer. It’s obviously not worth starting a bush fire to get even the most epic smoke bomb wedding photos. If there’s a total fire ban, I’d say it’s best to not mess around with smoke bombs. You might also be at a Sydney wedding venue that’s got lots of neighbours close by or you’re doing your wedding photos in a public space. In that instance it’s probably much kinder to those you’re sharing the air with, to not light up huge plumes of smoke. So what’s the alternative. You want the look of epic smoke bomb wedding photos but you’re stuck for legal or practicality & safety reasons. I’ve found myself in this situation a fair bit and there’s a few solutions if you’re ready to get creative. Atmosphere Aerosol: The easiest option is to use a product called atmosphere aerosol. This is basically a smoke bomb in a can. But with loads more control. My inner pyromaniac is a little less excited about smoke in a can, but it’s definitely a great alternative. Atmosphere aerosol is a lot thinner than smoke bombs and you’re going to need an assistant to spray it into the air. You’ll need to be a lot more careful of wind. Atmosphere aerosol really shines at night when it’s really still or in indoor areas where you can fill the room with fog. Aerosol is great for your public spaces or during a fire ban because if someone comes up to you because you’re causing mayhem, it’s a lot easier to stop spraying fog in a can than put out a smoking flare. Because it’s not actually smoke you’re going to find it’s a lot more kind to your nose and eyes as well. This probably includes your lungs to be honest. 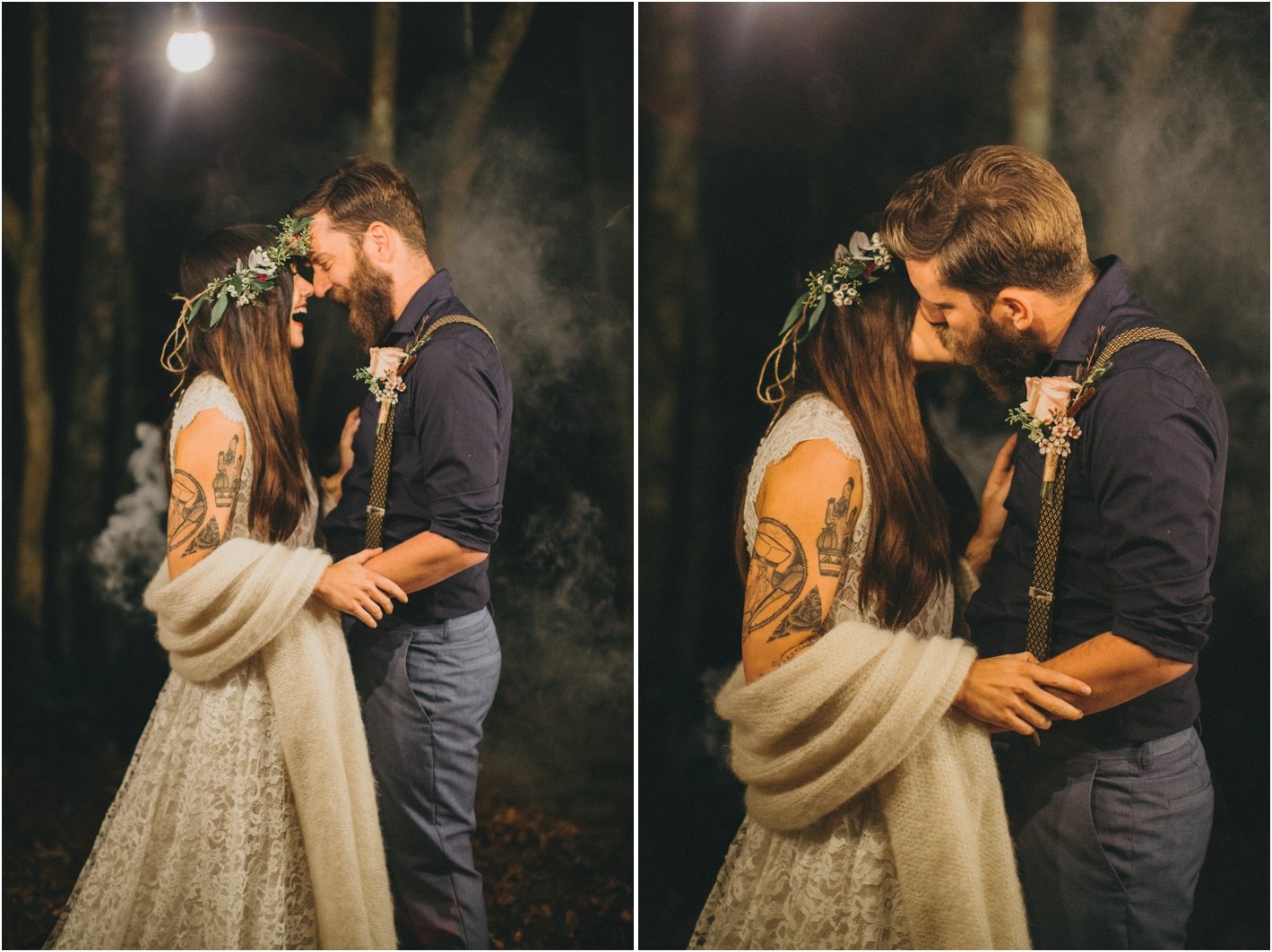 The drawbacks of aerosol are always going to be when you’re wanting massive plumes of colour during the day because it’s a little thinner. And also if you want the bridal party running with  smoke bombs or the couple holding them while they’re in an intimate pose. It’s going to be a lot easier to hide a small smoke canister in someone’s hand than what will look like a huge can of hairspray in everyone’s hands. Dust: Wait, what?! Dust?! You heard me. I’ve found myself in a bunch of situations where smoke is just not going to be plausible. This works best at night but you can definitely get it work under the right lighting conditions in the afternoon. You’re not going to get the same range of colours with dust but you can absolutely use it to create great looks. Very similar to the aerosol option. The image below was shot with the dust from a car doing a cheeky burnout and then using its headlights to light the couple. The burnout honestly is optional. But if you want to stir up some dust there’s a few main ways to do it. If there’s a branch on the ground or a rake nearby and usually a driveway if you’re on a country farm. Dragging the branch along the ground or raking up the loose dust up into the air will yield the same results as below. You can also just get a car to do a drive by. Doesn’t need to be crazy fast. But a little bit of speed goes a long way on a dirt road to stir up some dust. My suggestion is to work out what kind of pose you’re going for first. Then get yourselves off the road while the car blows by and then jump back into position. 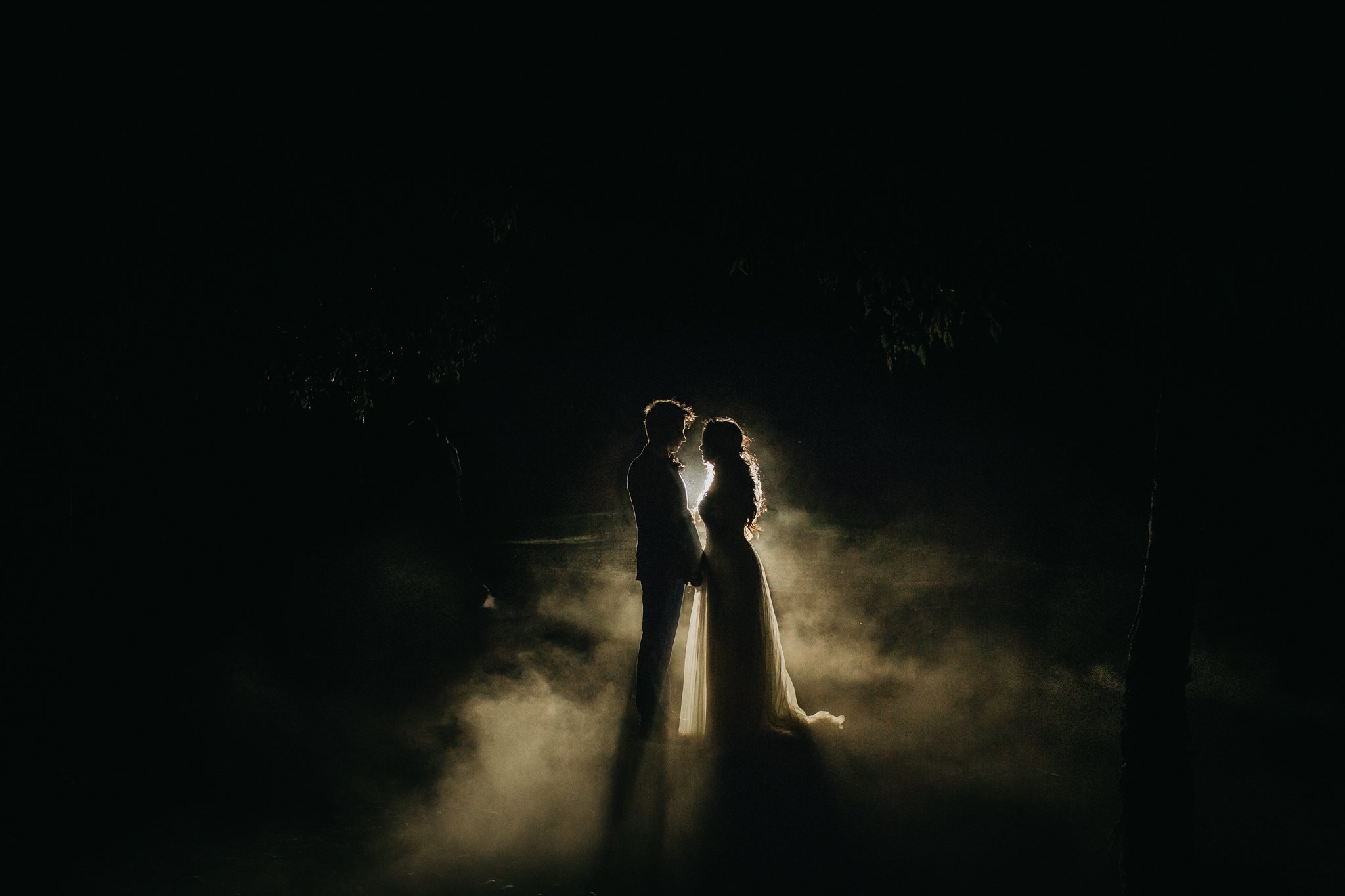 This image was create at dusk by driving the car back and forth a few times on a pretty dusty road. Remember, the further away the light source is, if you’re using a car or maybe an off camera flash, the more distance of dust will be illuminated by the light. So if you want to get more dust in the shot you don’t always have to do more wheel spin magic, sometimes just stopping the car further away will just mean there’s a larger amount of dust to light up between the couple and the car. 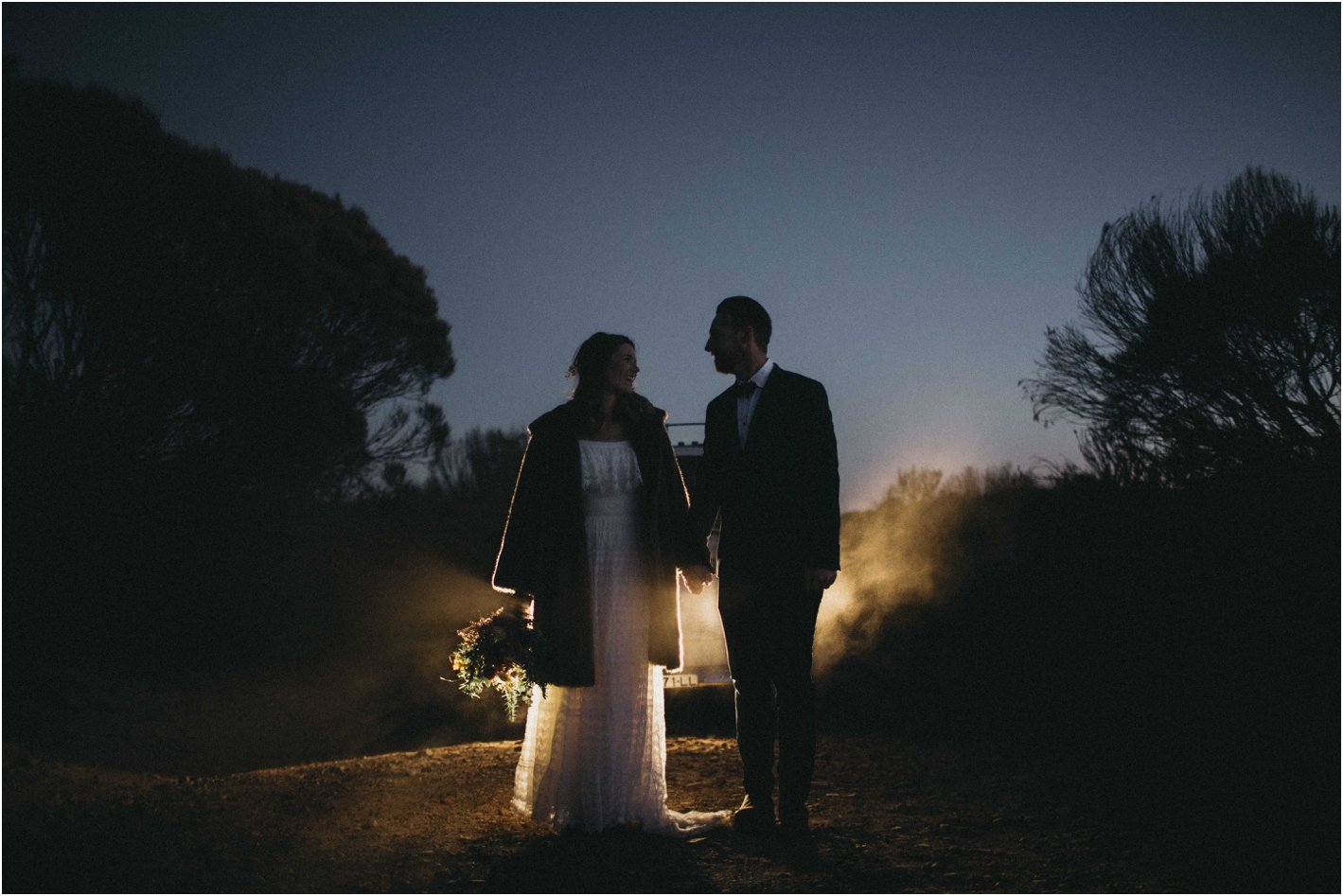 I hope you’ve found these tips to get your own epic smoke bomb wedding photos really helpful. If you’ve got any questions about creating your own smoke bomb wedding photos that I haven’t addressed in this article be sure to drop me and email and I’d love to help you out. Also if you’ve got a hot tip that I’ve missed you can also drop me a line or slide into my dm’s and let me know what I’ve missed. And If you’re wanting to have me take some beautiful smoke bomb wedding photos at your own wedding or elopement I’d also love to hear from you. I spend most of my time in the Southern Highlands or South Coast of NSW but I travel all over this beautiful country documenting weddings & elopements so I’d really love to hear from you regardless of where you’re getting hitched. 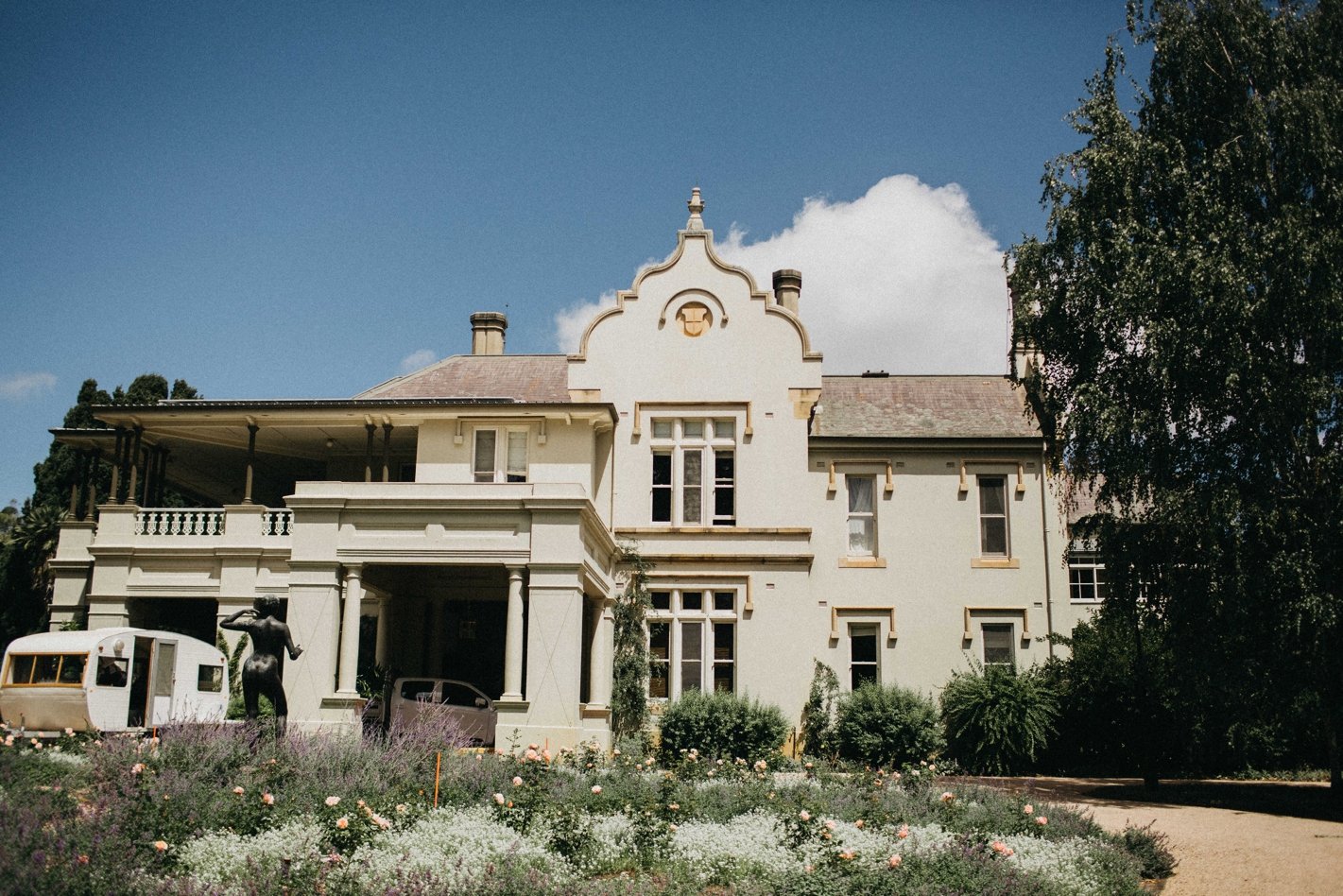 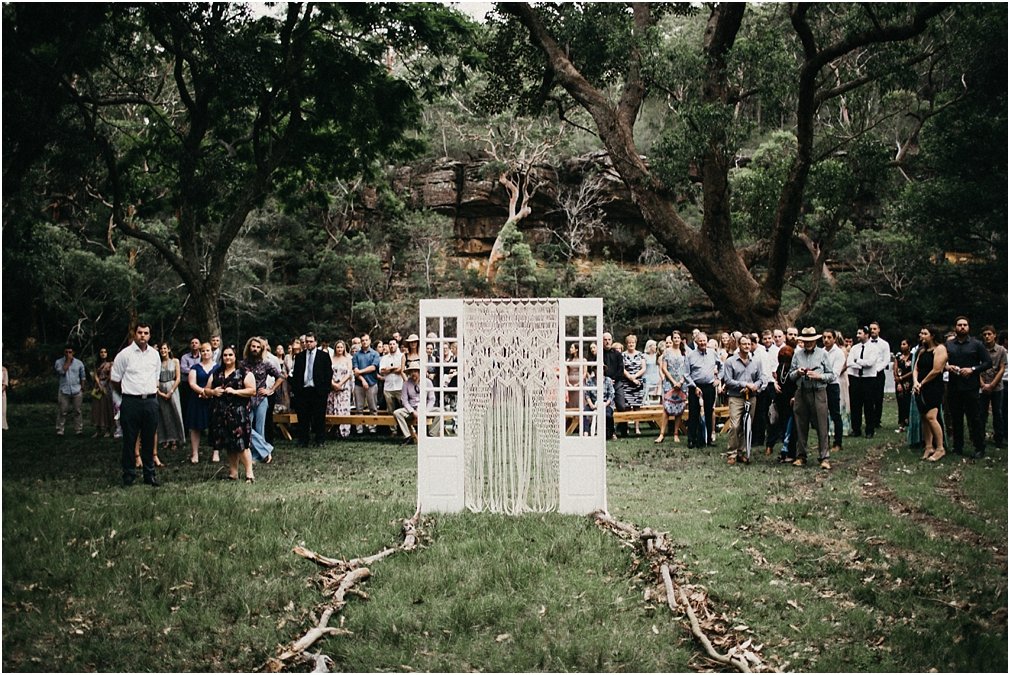 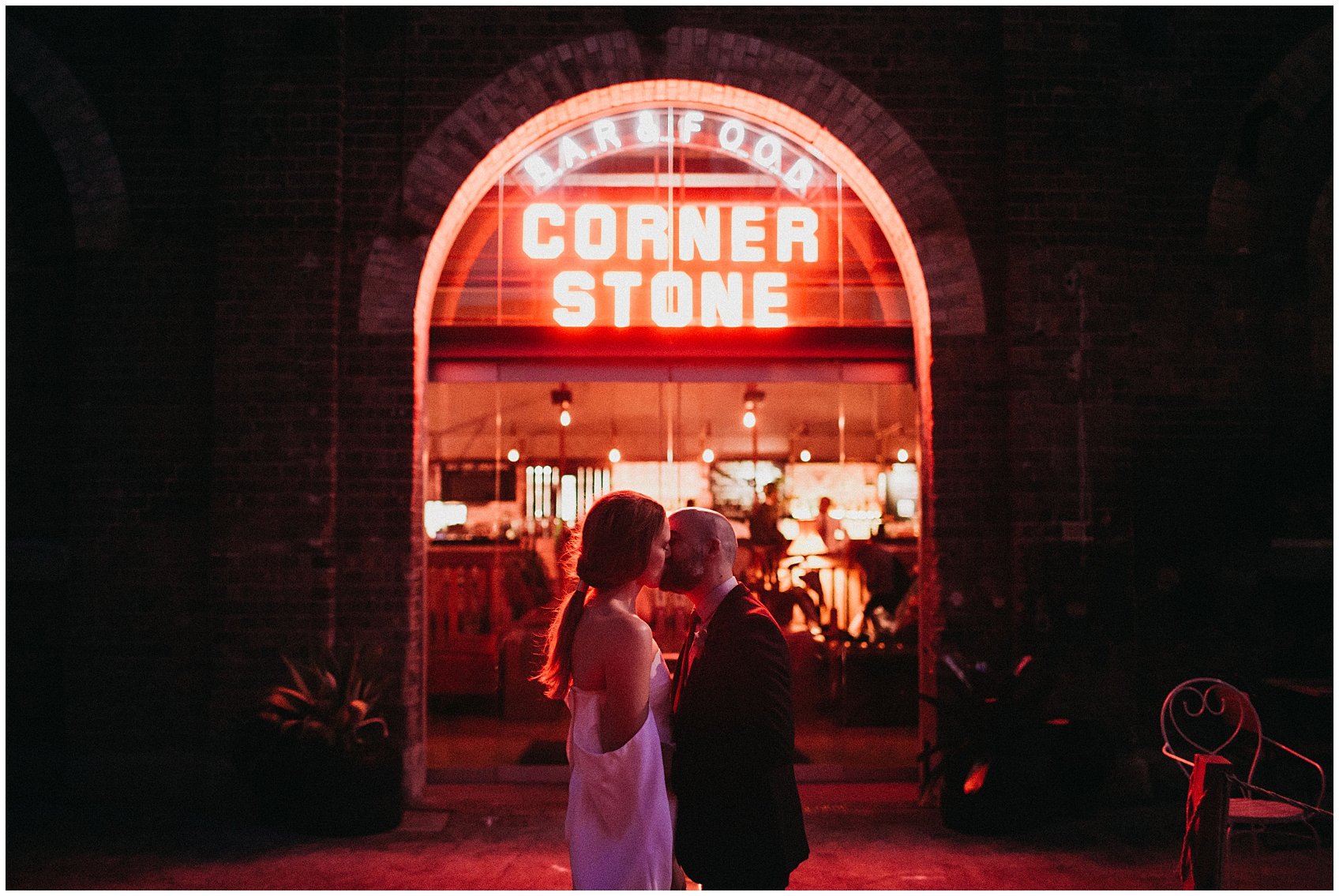